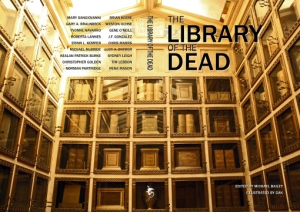 Because I hate images without captions: This shot always makes me feel vaguely claustrophobic.

So, anyhoo,I read a lot of short fiction.  Like, dozens of dozens’ dozens.  To date, I’ve edited two magazines and two anthologies.  Writers are hungry.  And compulsive.  So…lots of submissions.

That means, when I’m not actually editing, I flit between books and magazines; read a story here, check a bio there, peruse an introduction.  That sort of thing.  In my To Be Read pile are no less than eight collections (Harlan Ellison, Dennis Etchison, etc) and anthologies (Truth or Dare, edited by Max Booth III, for example), all at varying amounts of completion.  This isn’t anything against those people or books, but when I metaphorically clock out of editing for the day, I tend to want novels.  Enough sucker-punches–as good and hard as they may be; gimme a brawl so I can appreciate those sucker-punches again.

Hmmm.  That was a little violent.  Whatever.

(Yes, those books will get read and books that are sent to me to review get read from beginning to end without jumping.  Anyway.)

However, when Michael Bailey was looking around for a beta-reader for the (then) upcoming Library of the Dead, I jumped at it without a thought.  Why?  Why give myself extra-work (beta-reading is work, anyway–if you’re good at it)?

Because Michael Bailey has consistently had the goods and I like seeing what he’s put together, whether I’m in the book or not.

Over the past few years, Bailey and his Written Backwards house has made a name with anthologies.  It’s actually been interesting to watch. The dude started out small, hitting the radar–small-y, at the time–with Chiral Mad and each thing afterward snowballed from there, growing bigger and bigger.

It was Chiral Mad that drove me to write something for Chiral Mad 2 (the story was well-liked, didn’t fit the straight horror of the antho, so Bailey slotted it into Qualia Nous and I’m so sure you wanted to know that).  With each anthology, both the book and Bailey received more attention, giving him the ability to do more and more things.  Case in point: each anthology keeps being nominated for more and more awards.  Gary Braunbeck won a Bram Stoker for his story in Chiral Mad 2, and two authors from Qualia Nous–awesome people Rena Mason and Usman T Malik–tied for the Stoker with their pieces (oh, and QN was nominated, too).

Now we have Library of the Dead.  Through the frame-story–written by Bailey–an unnamed narrator walks through the Chapel of the Chimes, a real place in Oakland, California.  Each story, then, are the “remains” the narrator plucks from the shelves (oh, yeah–the remains are held in book-shaped urns, which, if true, is delightful).  Death is on full-display in this anthology, but whether it occurs in the story, or if the story is a reaction to a death is left to the individual pieces.

With a theme like this, it can either go off the rails or work triumphantly, depending on the steel of the editor.  In this case, both the writers and Bailey work and, when a story doesn’t hold up, it’s within that piece.  That’s the nice thing about anthologies and magazines; unlike a novel, a single dud story doesn’t sink the ship, whereas if you hate a major character in a book, the book becomes a lesser thing.

When it works, you have pieces like Brian Keene and Mary SanGiovanni’s “The Last Things to Go” which has almost zero violence in it–in fact, the one death occurs long before the action of the story begins–but leaves you shaken nonetheless.  Actually, in all fairness, this was my favorite story–one I was telling my wife about that night.  Other pieces mix technology and urban legends–the late J.F. Gonzalez’s “I’m Getting Closer”–or extrapolate all the ways and results of seeking a better high–Weston Ochse’s “Reliving Through Better Chemistry.”  Lucy A. Snyder straight-up messes with Lovecraft in the delicious “Cthylla” and it’s awesome.

Not all the pieces land without some damage (and, as I said when I reviewed The Best of the Horror Library: Vol 1-5, I’m not saying which because what didn’t work for me might work for you; I will say that of the 15 stories, only 2 didn’t take off for me), but. again, that’s the beauty of anthologies.  Everyone’s tastes are different so if one works for me, but not for you, there are many others.

In other news, beyond what Bailey is doing for me, his Written Backwards outfit is setting up an ambitious little gig for fellow QN‘er and Library of the Dead contributor Gene O’Neill. You can check out the info here and, if moved (you should be), take part here.