So, y’know, this happened: 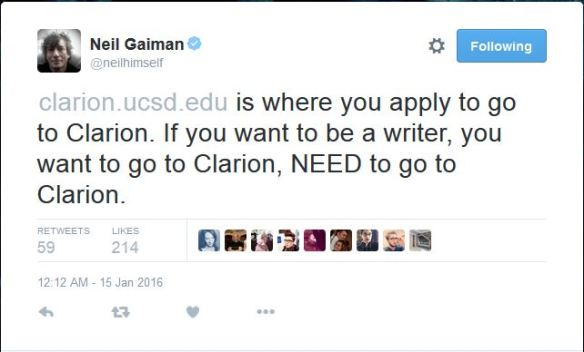 And the world–as far as social media is concerned, anyway–exploded.

I first heard about it from this tweet by Nick Mamatas (didn’t go to Clarion), then I saw “Clarion” trending on that little leftside “trending” menu that appears on my screen (I have a flip phone–a new one, B-T-Dubs, which makes me a Luddite to my students–and, thankfully, no Internet access, so this is based on what I see on a computer screen).  In spite of the Mamatas tweet, and subsequent exchange with Clarksworld, I had a moment of “Oh yay, they’re talking about Clarion University!” (I went there and, yes, it was where the Clarion workshops originated; I went for teaching, however.)

And then reality crashed in and I remembered what the actual argument was.

On my end, I saw an argument about the merits of Clarion graduates versus non in terms of quality of writing.  Apparently, there was a metric fuck-tonne of arguments going on, ranging from what I saw, to definitions of a “real writer” (I saw that one, too)…to question Gaiman’s reasoning and motive for tweeting that comment in the first place?  Apparently. 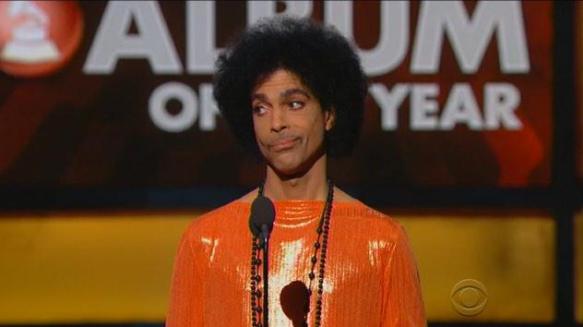 I sniped in briefly from the sidelines (which, really, is all Internet arguing can ever amount to) about the two different arguments I did see– 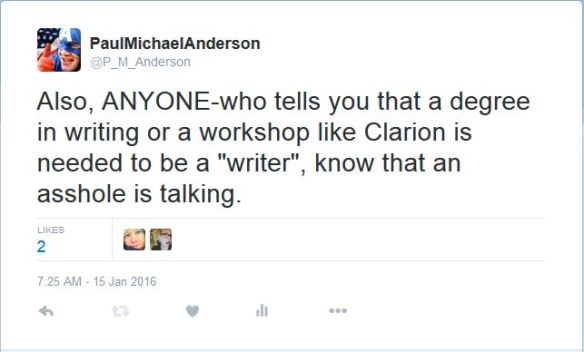 –and  then went about my day.

(Christ, this is a picture-tastic post, isn’t it?  Anyway.)

When I got back on the ‘net this evening, the tide had turned.  Gaiman had posted a clarification– 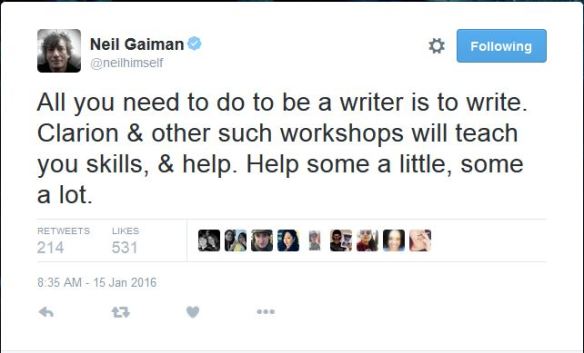 –and a whole mess o’people were going after those who’d gone after Gaiman or the topic of Clarion in general.  I saw a lot of “it’s OBVIOUSLY hyperbole, stupid” and “you’re talking from a place of privilege” (from two different angles, oddly enough) comments floating through the social media Thunderdomes.  Brian Keene chimed in.  Adam-Troy Castro did, too.  As did Helena Bell (who did go to Clarion, so it’s totes obvs that we’re dealing with Lucifer here).  These were just plucked from my newsfeeds; dammit, I’m not screen-shotting the entirety of my Facebook.

Now, back to the chorus: Oh, for fuck’s sake.

Okay, from the top, breaking this down on all sides (and, it should be noted, I’m going to be talking about the people legit upset, not the fucking morons who decided there was some monetary motive on Gaiman’s part; I will shout it from the mountaintops: those cretins have their heads shoved so far up their asses it’s actually a wonder they can read a computer screen or smartphone at all and we should applaud them on their goddamned agility):

Gaiman’s tweet was stupid.  It was and it really doesn’t fucking matter if it was meant as cheerful hyperbole.  When you have, without hyperbole, a Writing Icon (with intended initial caps) stating that you NEED to do This One Thing to be a “writer”, you’re going to rub people the wrong way.  And, please, don’t feed me that bullshit about, “Well, come on–look at how much he talks about being a writer and making art on his Journal, or his Tumblr, or on Buzzfeed.”  Let’s keep it real for a sec, ‘kay?  Unless you’re one of the Devoted Gaiman Acolytes, how likely do you think it is for people to lurk through all of that?  How more likely is it, actually, that Person A likes Gaiman, follows him on Twitter, sees him occasionally pop up on Twitter feed, but only rarely goes looking for shit by or about him elsewhere?  I think it’s pretty goddam likely, don’t you?  Do you, dear reader, read everything this writer you kinda-like puts up?  I mean, I can’t see your lying face right now, but you have a lying face on, don’t you?  So, anyway, this Person A, not that plugged in, sees Gaiman’s tweet.  With that context, the initial umbrage makes sense.  Even Gaiman had to clarify it and he’s kinda at a place in the world and in his career that, based on his popularity and his past, he doesn’t have to.  But, again, he did.  So, please don’t diminish that (don’t worry; I will in a bit–hold on).

Secondly–oh, spare me the “check your hyperbole meter” bullshit.  As anyone who has ever been quoted knows, how you say things differs between spoken and written.  This difference is compounded when you go from written to the compacted mindfuck that is Twitter.  A person isn’t stupid, or even oblivious, to have “missed” the hyperbole.  Kudos to the creature that has mastered both the reading and creating of nuance within 140 characters.

Thirdly, privilege.  This one’s just bizarre to me–not because I am what John Scalzi rightly calls “the lowest difficulty setting ever”, but because I heard about it from two different angles.  At first (in the order that I saw it), one’s privilege was being shown by how angry they were getting over this topic.  Then, later, I saw the privilege card being thrown at Gaiman because, la-de-dah, he’s big rich writer who can afford the whole Clarion thang (side note: yeah, Clarion’s expensive as hell, as are most workshop programs, making them naturally exclusive).  The instance where the privilege angle gets tossed in is awkward for me; I suspect it’s point and purpose is to remind everyone to keep things in perspective (i.e. “hey, the world’s burning out and starving itself and going to war on itself, so maybe going into a spaz-attack because Starbucks fucked up your coffee order isn’t the best use of your time and energy”), but it always feels like it’s being mentioned in the same tone of the Mom in A Christmas Story reminding her kids when they don’t like dinner that there are starving people in China–as in, not the “hey, let’s keep a level head in this world of ours, okay” but the “you are entitled, according to me, and don’t get to be pissed at something”.  I really have no comment on that beyond that.  Maybe it is because I’m on the lowest difficulty setting, but the privilege comment always feels like the other person would rather say, “Look, this shit don’t matter and I’m tired of listening to you bitch”.

Finally (before I talk about the other side)…Christ, man, for those people getting all mocking and up and arms at the people upset…you do realize that, when it comes to art, it’s kind of a personal thing and people get thin-skinned about it…right?  I mean, let’s be honest, you people who have routinely published work, do you remember starting out, maybe not getting a lot of support from your circle of friends and family, maybe getting odd looks for the time you’re devoting to this “hobby”, maybe being outright chastised for it?  Do you remember feeling insecure about it (sure you do; it was probably last fucking night, given us writers and our neurotic tendencies)?  Little empathy here–put yourself in the poor schmuck’s shoes who maybe just had an argument with a loved one or colleague about this “hobby” and then seeing this Writing Icon espouse the necessity of a thing they could never possibly afford.  (The irony is not lost that those people, who could use a decent support system, is kinda what Clarion and other workshops are meant for.)

(Actually, a little empathy all around would probably be good thing.  Never happen, but a nice idea.)

Okay, now that I mentioned and talked about all that…

You do realize all this is bullshit, right?  I even talked about it the other day.  Even if Gaiman’s tweet was 100% serious and intended, you know that doesn’t fucking matter to you, right?

I have my own biases; we all do.  I’m just an ordinary sinner.  I’m with Brian Keene on what it takes to be a writer…but I make sure to qualify that there’s a difference between being a writer…and doing this as a job, which requires talent and an ability to work in the machine that is publishing (as I discussed in the last blog post).

So when I talk about writing, and what it takes to be a writer, I’m actually talking about two different things.  Write every day, tell yourself stories, create your art…but that’s not necessarily a doorway to a career or even a lucrative side-job without the other two prongs I’ve mentioned previously.   No workshop, MFA, writer’s group, or good ol’ elbow grease is going to change that.

But that cuts both ways.  You don’t need parents, a lover, friends, a professor, colleagues, or a mentor for permission to write.  You do it because you have to.  You do it because, in your gut, you have no other choice.  You do it your own way, on your own time, because it fulfills you in a way nothing else can.  You might never make a red cent doing it; no one but your closest circle may ever see it (if that).  But those things don’t matter.  You do it and you do it with as much verve as you can.  You’re a writer–yay!  When you get caught up in the rage that a Gaiman tweet creates, or an article by an MFA teacher, or whatever, you’re telling the world and, if you’re a bit introspective, yourself that you haven’t given yourself permission to be okay with art and your place in it.  (Don’t worry, we’re all fucking like that at some point; I am, you are, and I’m pretty fucking sure Gaiman gets it, too.)

But it’s all bullshit.  Every workshop, every MFA, every article, every tweet, every sneering remark from a loved one (which always cut more deeply than anything on the ‘net).  Every piece of advice, every rule, every gate and gatekeeper, every criticism.  All bullshit.  You, no one else, choose what and if and when to shovel it.  That rage you might’ve felt?  That was you shoveling all of it.

(And those sneering at that rage?  That was you whistlin’ past the graveyard, friend.)

How much shit do you feel like shoveling, today?

(Actually, ignore all that: You need Nick Mamatas’s Starve Better. THEN you’ll be a writer.)