Adrian Shotbolt over at his review site Beavis the Bookhead has been running a writer’s version of VH1’s old show Storytellers (is that show still on?  Jesus, if it doesn’t have a corporate mouse on its logo, I don’t watch much television, anymore).  This past weekend, he’s been talking to the contributors of the Perpetual Motion Machine Publishing anthology Lost Signals (a really great book I’m more than a little proud to be a part of), and he spoke with me, Betty Rocksteady, and Michael Paul Gonzalez about our stories.  You can check it out at the link, friendo (to cop a saying from friend Jessica McHugh).

Last week, Eddie Generous over at Unnerving Magazine asked me for some book recs and I obliged because I love talking about good books–and not all of them horror.  I take a kind of perverse pride in not sticking to my specific genre, if only because so many meatheads do stick, stubbornly, to only one genre.

That was probably the most startling thing I discovered when I dove into writing professionally/fandom/either-one-is-a-kind-of-Sisyphean-hell-so-terminology-is-up-for-grabs: you go to conventions or workshops and meet people who wouldn’t dream of stepping outside of their own imaginative neighborhood.  SF fans who turn their noses up at horror, horror fans who think romance stops and starts at the covers of Danielle Steel novels, fiction fans who think nonfiction is confined to only boring textbooks from eleventh grade history class.  All of them oblivious to the fact that, regardless of the mode, there’s a good story maybe waiting there–or, on a strictly self-interest level, turns of phrase or characterization or plot development they could learn from for their own work.

Meatheads.  I hope I’m not one of them.

So, over at Unnerving you can read what books turn my dials up to eleven, but here are a few almost-rans, the books I almost gave in the article, if it pleases you: 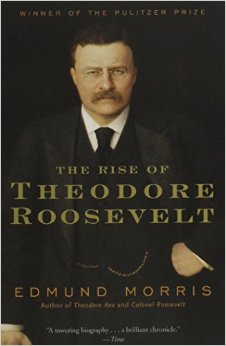 In college, my history professor, noting my interest in late-19th century/early-20th century history as well as the centrist-progressive politics (is there such a thing? fuck it, sure) of my weekly column, recommended Theodore Rex, by Edmund Morris.  I’d known of TR, of course, but like most kids in the latter days of the 20th, I knew more about his cousin, Franklin.

Reading the book, the second in a planned trilogy by Morris, was riveting, chronicling TR’s two terms in office, from tumultuous beginnings to placid end.  I immediately went out and hunted down The Rise of Theodore Roosevelt, which won the Pulitzer and National Book Awards in 1980.  This book, the first of the trilogy, detailed the beginnings of TR’s life.  Morris’s writing is breathtaking–he takes library-sized-chunks of first and second-person accounts and manages to tell an actual story without dropping into the safe and dry-as-the-Mojave voice of a textbook.

He completed the trilogy, and the end of Roosevelt’s life, a few years ago with Colonel Roosevelt.  I cannot recommend this trilogy enough, but start with The Rise of…first.

(Oh, and avoid H.W. Brand’s TR: The Last Romantic; it’s really, truly dogshit.  Brand has a hardon for Woodrow Wilson, so everything else pales before the old Princeton president and cosplaying Lovecraft hobbyist [in both looks and views!].  To that end, Roosevelt gets pretty shoddy treatment.  A nice supplement to Morris would probably be The Bully Pulpit by Doris Kearns Goodwin, which contrasts TR’s friendship with Taft and the rise of activist journalism.)

We Have Always Lived in the Castle, if you’re only a casual fan of Jackson (meaning, you know The Haunting of Hill House and–maybe–“The Lottery”), is unknown then, man, you need to discover this book.  Tension pulls like a hangman’s rope and everything, everything, feels off and the almost orgiastic violence at the end feels like true catharsis.  Read this fucking book.  Like, now.  I prefer Merricat to Eleanor.

In the 1980s, you were a fan of Rambo or Rocky.  I went with the sullen, PTSD-afflicted Vietnam vet and it was only until years later, when I read the novel finally, that I figured out why I preferred the first movie to the second, where Stallone fully transformed this character into a stock-1980s action hero.  Morrell’s character is the true anti-hero and there is no set good-guy-bad-guy here; Rambo and Teasle are perfectly matched in good and bad attributes and watching them bounce off each other is a treat of missed opportunities and retribution.  In both the book and the film, the introduction of Trautman is almost a disappointment.  I got a special-edition hardcover last year for my birthday, finally replacing the battered paperback pictured above. 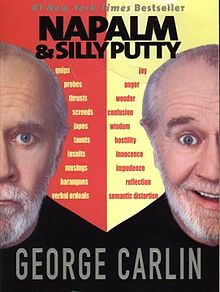 If I’m funny at all (debatable), if I know anything about comic timing, it’s because I saw George Carlin’s 1991 special Jammin’ in New York when it premiered and when I was eight.  Y’know, a wholly appropriate age to understand things like syphilis jokes and Desert Storm.  Carlin once said that there are performers who wrote their own material, but he always thought of himself as a writer who performed his own material.  The distinction is thin but not that hard to see.  This is Carlin’s second book, after Brain Droppings and it’s basically a written version of his 1990s-era standup but thrown through his 1970s-goofball-nature.

This Is Horror‘s running their 6th Annual Awards and nominations are open for the month of November; my book’s not out yet, but that shouldn’t stop you because there’s been a glut of great books this year (and, hey, if you have read Bones Are Made to be Broken, maybe…?)

Also, finally settled because people who backed the earlier campaigns got first-dibs, Bones Are Made to be Broken will be hitting digital/physical (?) shelves on November 29th.  You can pre-order here and, as I’m writing this on Election Night Eve (like a reverse Christmas where Santa kicks you in the balls), you can use the book for fire fuel after reading it–depending on who wins, of course, and I’m not talking about the Capable Queen of Pantsuits–so order lots, ‘kay? It’s gonna be a cold winter.