(QUICK NOTE THAT I BEGIN EVERY WASTELAND DISPATCH WITH:

(Last year, 2016, I found myself struggling to get through a book as quickly or with as much enjoyment as I used to.  No shade thrown on those books, but my life had become busier and it was easier to read io9 or cruise my Facebook newsfeed than crack open a book.  I didn’t like that and the Goodreads Reading Challenge seemed like a nifty way to get my head back in the game.  Of course, after setting my challenge, I realized I had way overshot my count in comparison to others–some of them reviewers, for Christ’s sake–so this became what will hopefully be a fun, year-long experiment on crashing and burning.

(But, on a related note, I’ve always wanted to see how I read over the course of a year, what my tastes were depending on the time of year, the circumstances, etc.

(So, here’s Dispatches from the Goodreads Reading Challenge Wastelands.) 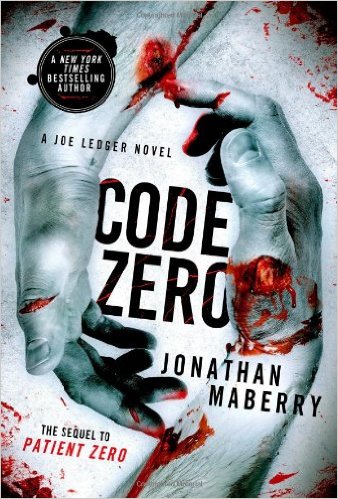 *reaches the last page of Code Zero, the sixth book in the Joe Ledger series*

For the TL;DR crew – Marketed as the sequel to Patient Zero, the novel that introduced the viral zombies and series protagonist Joe Ledger, Code Zero reads less like a sequel and more like a marriage between the standalone nature of Extinction Machine and the continuing-saga feel of the novels King of Plagues and Assassin’s Code.  A good novel, but newer readers wouldn’t really have to worry about reading Patient Zero before diving headlong into this one.

So–yay!  Having re-read the previous installments in the Ledger series, I can finally crack open a new–to me, anyway–Ledger novel, a novel that’s been sitting on my shelf since late September of 2016 (hence the reason why I took on the laughably-doomed Goodreads Reading Challenge in the first place).  Being in this position, I’m kinda curious as to whether or not my initial reactions–written here, for the posterity of the literal handfuls of you–will hold up on re-reads.

That’s the fun of reviewing.

In any event, Code Zero finds Ledger pitted against a psuedo-anonymous terrorist going by the name Mother Night and, really, it couldn’t have come at a worse time.  Showing an intimate knowledge of the Department of Military Sciences, as well as executing a long-gestating strategy, Mother Night stretches the DMS to its limits with random bombings and acts of violence, all the while releasing short doses of Beserkers (the genetically modified brutes from The Dragon Factory) or releasing pathogens in contained areas for maximum effect (the weaponized ebola from The King of Plagues or the seif al dein virus from Patient Zero).  Joe Ledger, trying to maintain a normal life with romantic partner and cancer survivor Junie Flynn, is thrown through hoop after hoop, trying to stop Mother Night before she reaches her endgame.

For the first third of the novel, Code Zero reads less like a sequel and more like a traditional Ledger novel, with plot points continuing from previous novels.  In spite of knowing that Maberry outlines, then writes the end before properly “beginning” the novel, it felt until about the 50% mark that the novel could go either way–either straight into the Zombieland or continue on the trajectory it had been on.  At about that point–when the fallout from a particular incident with the zombie virus is fully known–it almost reads like Maberry got a better idea–or, rather, the story demanded it–and Maberry just ran in that direction.  Because of this, it doesn’t feel jammed in, but you can see a left turn taken, albeit one that’s organic to the circumstances of the story (which is good and one of the things I knock the later Repairman Jack novels for–that idea the story has to go this way).

Because of this, readers who want a zombie free-for-all have to wait until the climax, and only then in a controlled dose as described by Ledger–now knowing who Mother Night is–racing after the terrorist.  Again, it’s less than a sequel and more like the continuation of a plot line as seen in novels like The King of Plagues (which, it could be argued, is a sequel to Patient Zero in that the villain of both books is Sebastian Gault, with him “returning” in Plagues).

The novel, which could have been tripped up by any number of instances–continuity, the urge to “top” the first book, doesn’t.  The basic conceit derives naturally out of a what-if from Book One–what if the plague had gotten out of the Liberty Bell Center where the climax of Book One occurred?–and Maberry doesn’t try to go extreme with it (one of the things I enjoy–and it’s either through Maberry’s talent or his ability to work a problem through all permutations in his outlines–is that everything happens seemingly organically).  The villain, who Maberry posits has been around since even before Ledger came to the DMS makes sense and fits–the computer genius Bug didn’t get much space in the stories until Book Three, for example–and doesn’t feel like a continuity rewrite (there’s a flashback in Plagues that my ears always prick at, where Maberry and a full-fleshed out Echo Team are doing a mission.  The timeframe of the mission is between the events of Patient Zero and The Dragon Factory, but, during The Dragon Factory, Echo team is still reduced from the events of Book One.  This is my only instance of goofy reader trivia bookdom).  Readers will figure out the mystery of who Mother Night is before the characters do, but it isn’t much of a slog for the readers while they wait for the others to catch up.

Now.  Let’s talk that ending.  The ending makes the book and even though I thought it might happen, I didn’t expect it to.  I’m not going to spoil it, but I’ll say this–Maberry has never shied away from killing long-time characters, even if there does seem to be a veil of invulnerability over Ledger (obviously), Top, Bunny, Rudy, and Church.  Still, while I, the reader, could envision the brutal event, I didn’t think Maberry–who, while a martial arts expert and possessing of an awesomely vulgar conversational tone at times, resembles the uncle you knew as a kid that was the perfect person to lean against–would go for it.  Still, he did, but I gotta stress–in these post-The Walking Dead, doing-it-to-shock-the-audience times–that it was gratuitous or over the top.  It fit.

Now onto the last Ledger novel–for me, at least, since I don’t have either Kill Switch or Dogs of War, yet–Predator One.