He’s about the size of a quarter–that’s not hyperbole–and the Bug found him (or her, whatever) while playing in the dirt in the old front garden. We thought he was dead at first, actually.

As we settle into our 2nd year in this house since purchasing it, my wife and I have been slowing piling up the Epic-and-Everlasting-To-Do List of things we want to do outside the house, inside the house and, basically, end up like a less wealthy version of Barbara and Oliver Rose. 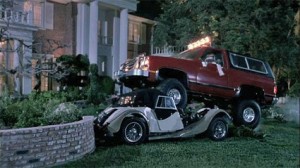 Except without the divorce and murder-suicide, but definitely with a monster truck, because that’s how we roll.

One of the things to go is the front garden, which had railroad ties older than many of my students and, from previous tenants (we bought the home we rented), was completely ignored.  So, out goes that shit, with the intention of making the garden bigger.

Now, we live at the edge of the forest, and our yard is crawling with life, including box turtles.  My wife had seen them around our garden in the spring, forgot about them, and then, tonight, remembered them when our four-year-old, poking through the old garden, said, “Hey, look!  A turtle!”

It’s a hatchling and, based on the Google, it’s fairly young (it hasn’t fully absorbed the yolk of its egg yet, resulting in this weird mass akin to that crinkle of skin newborns have after the umbilical cord is snipped), so we agonized over whether to leave it or bring it in, knowing that, if it lived (most hatchlings don’t)–hey, look another pet.  But, it’s getting cold and we couldn’t find its original nest.

Well, you saw how that turned out.

My daughter named the turtle because of course she did, but what the hell–it’s a pretty decent name.