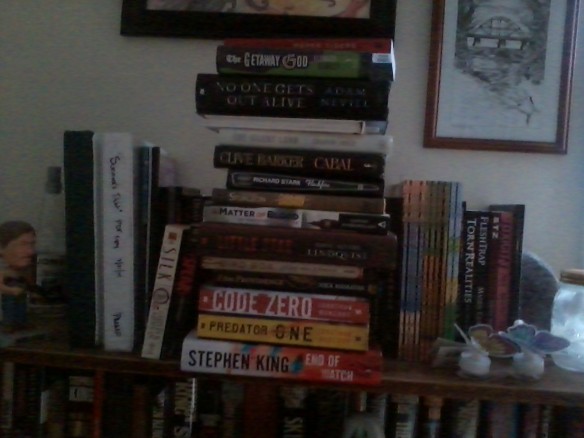 My current TBR (To-Be-Read, for whoever might not know that acronym) pile.  I’m quite happy with it.  Books I can’t help flip through whenever I pass this bookcase (the pile is currently covering a portion of my ego-shelf; hanging in the upper righthand corner is the illustration Glenn Chadbourne did for my story “The Agonizing Guilt of Relief (Last Days of a Ready-Made Victim)” in Chiral Mad 3).

I know a lot of people who buy and buy and buy books, piles of books, stacks of books, with the intention of reading them…eventually…but the idea makes me all spastic.  More power to those people, but I was once at a party at a house, and the walls were lined with crammed bookcases.  I asked the host about them and the guy shrugged–I can’t remember his name; he was a friend of a friend–saying that he hadn’t read most of them.  I wanted to scream.  Maybe I’ll never lose that aspect of renter’s mind, that facet of my personality that kicks in whenever I’ve moved (which is frequently over the course of thirty-three years), but if something’s taking up space, and I’m not using it or have no intention of using it, it’s got to go.  I…I just can’t.

So, I see these memes of book-buying addicts and I just go, “Yeah, not me.”  I have, typically, five bookcases filled.  If it gets to the point where I have more books than space–frequently–I go through and purge anything I’m not going to read again.  What people see is the distillation of frequent re-reads.  If I had more shelves, I’d have more books, but there you go.

Secondly, I have a kid, so if I’m picking up something for myself, I have to justify it hard to myself or else I feel guilt (most books I get, then, is due to ARCs and gifts from family) for not putting the money to the kid, or the house, or–hell–savings.

But, anyway, this TBR pile.  Again, I’m excited to dig in.  There’s not a book there where I either don’t already love the writer or the plot of the book.  If the picture sucks to you, this is what’s stacked there:

The Get-Away God – Richard Kadrey (kinda annoyed with this one; it’s the sixth book in the series and I’ve only read the first two, but when I see a hardcover Sandman Slim, I pick it up)

No One Gets Out Alive – Adam Nevill

A Matter of Blood – Sarah Pinborough

I Am Providence – Nick Mamatas

But, what are you doing?

If you want to add a book to your own mammoth TBR-pile, may I suggest Bones Are Made to be Broken by, um, me?  It comes out in a month! 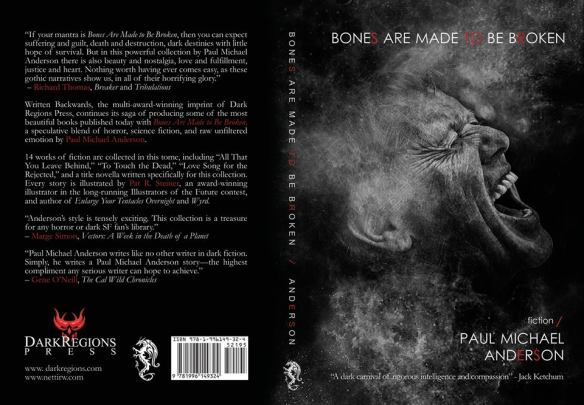