So, tomorrow (that’s April 5th, a Tuesday, and…y’know…the standard release day for new books), Chiral Mad 3 will be released into the wild in paperback, eBook, and deluxe hardcover.   Editor Michael Bailey has a write-up here at the Written Backwards site. 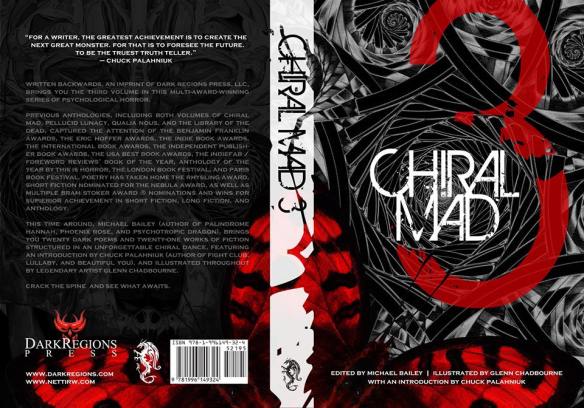 The Table of Contents is a Who’s Who of Awesome.

But, right now, this is all about me, baby, and I’m up there, with my mouthful of a title, “The Agonizing Guilt of Relief (Last Days of a Ready-Made Victim)” and I just have one thing to say:

I hope you enjoy it.

The story was, initially, the meat of another story that, to this day, still hasn’t been written to my liking (although I still have the opening line burned into my head: “We, the dead children, came out of the forest and gathered around the fire of memory”).  I wrote a draft, called “And You Will Hear the Dead Sing”, and gave it both to my wife and to the writer Damien Angelica Walters–author of Paper Tigers, so-far my favorite book of 2016–for a beta-read.

They both gave the story back a few days later and said the same thing: The frame-story was meh–good idea, but not any great shakes–but the core story was something I needed to take another look at.  There’s something, yknow, there.

And the implications terrified me.

I’m not necessary a monster-writer; to me, the most terrifying things in the world, or out of this world, are the things inside our heads.  Even when there’s a monster of a kind (Like in “In the Nothing-Space, I Am What You Made Me” or “A Nice Town with Very Clean Streets”) in the story, to me, the most interesting and horrifying aspects are what the people do or are driven to do.  However, I’ve used shades of the supernatural in every single piece I’ve published to-date.

But, with the core story, there was nothing supernatural.  It was just these two brothers and their single father.  Not a monster of any kind.

Jesus Christ, it was a, dare I say it, a literary piece.

I want to say, now, that I hemmed and hawed, that I agonized over the story and the work I would have to put in.  But, honestly, I jumped at the chance because, really, while the idea that it was just these three characters and what happens over the course of one week in December of 1996 (a time period that factors into another piece, called “The Universe Is Dying”, but I’ll get to that later), I saw something, a sparkle, that was so much cooler than any ghost or elder god or monster.

Here was a chance to put what terrified me most–what, to me, is the core of all horror–into the front seat of a story.  To let it drive it instead of adding verisimilitude from the passenger seat.  I got to focus on the mind.

At the time, it was the darkest story I had ever written, with the darkest ending.  There was no ambiguity with this one, no grinning crypt keeper smirk from the sidelines.  I put the horror front and center and forced everyone, including myself, to look at it.

In the story of our lives, we all want to be the heroes, believe we are the heroes, but there are always those times when we can’t be; we’re not even the villains, we’re just…helpless.  We want to do the right thing, we strive and kill ourselves over it, and when the decision’s taken out of our hands, what we feel is…relief.  Horrific relief.  The hero image we hold up as a reflection of what we think we are shatters.

I never could’ve written that story if it’d included the original frame, as awesome as that opening line is.

But, without it, I was able to write “The Agonizing Guilt of Relief (Last Days of a Ready-Made Victim)”, which made another beta-reader go “Jesus Christ” when he got to the end (I think that’s good), and, when Michael Bailey saw it, snapped it right up for Chiral Mad 3.

From there, it opened me up massively.  It became the beginning piece of a (unintentional) mourning triptych that continued into “All That You Leave Behind” (appearing this summer in Perpetual Motion Machine’s Lost Signals anthology) and “The Universe Is Dying” (in the upcoming You, Human anthology).  All three stories deal with loss on some form and, beyond “Agonizing Guilt” and “Universe” sharing the same relative time frame of the end of 1996, unconnected.  “Agonizing Guilt” is the darkest piece.

[ahem, all three of those stories, along with the new reigning champion of the darkest thing I’ve ever written will be appearing together, possibly.  Ahem.]

And, if you do like it, talk it up, will ya?  Reviews, social media posts, that sort of thing.